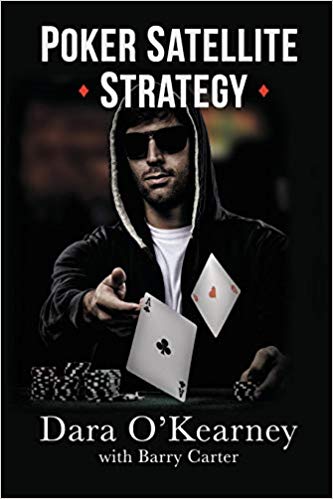 At a time at which the World Series of Poker tournament is at full swing, it comes at no surprise to anyone that many people are getting into certain events by the means of satellites. A creation of WSOP and Eric Drache (WSOP’s former tournament director), these satellites present players with the opportunity to take part in tournament at a much lower cost than the original buy in offers.  One author and book that we recommend is Poker Satellite Strategy by Dara ‘Doke’ O’Kearney.

Some people wonder what is the best approach to get into these tournaments. Hopefully, there is an answer. Dara ‘Doke’ O’Kearney, an avid poker player, together with Barry Carter, a co-writer, have produced a book called Poker Satellite Strategy. It offers a solid strategy to approach this particular poker format. It comes up with a useful roadmap on how to get into the tournamets.

The writer Dara O’Kearney is well-known for knowing how to win seats at European poker tournaments by the means of satellites. His strategy has allowed him to earn millions of dollars from tournaments prizes during the last decade – a strategy that’s outlined in his new book, the Poker Satellite Strategy.

The main philosophy both writers adopt is that a player doesn’t need to win each hand. He only needs to “remain in the hunt”. The idea behind this is to be able to ascertain the number of chips required to get you into the satellite reward. This can be accomplished by taking into account 3 factors – the total number of chips into a satellite tournament, the number of awards or seats to be distributed and a determination to target a certain level.

The book both writes have published will prompt players to think on their strategy prior to their next satellite tournament.  A Poker Satellite Strategy copy might just be the tool you need to make satellite events more profitable and enjoyable for yourself.

CLICK HERE TO BUY THE BOOK FROM OUR MARKETPLACE